A very treasured memory from my early teens is the night that Lotte, one of my oldest friends, and I rode our ponies from Seil Island to Melfort and camped out overnight on a hill behind Melfort village. We stabled the ponies there, so didn’t have to carry a whole lot except our baked beans and marshmallows (priorities right there!) nor go awfully far from any settlements, but nonetheless it was a taste of how I wanted my life to be.

There is something very special about traveling the country by horse. Not only was this the way our ancestors traveled for a huge chunk of human history, but you are truly connected to nature, or working with nature, on a far deeper level than any other mode of transport can offer. You and the animal are working together and trusting in each other to negotiate the land, and it provides you with the unique opportunity to really pay attention to and absorb the surroundings while your trusty steed carries you safely on.

I’ve long dreamed of spending days out alone in the mountains with a horse and a tent. One of the main reasons I was attracted to Corrour in the first place was the chance to use my free time to explore the highlands on horseback and make use of the drove routes and bothies. Sadly Corrour didn’t allow for any free time and so my dreams were put on hold for quite some time. Finally now though, things are starting to take shape!

The UK horse world is way too prim and proper for my liking. So my main goal for this trip to the USA was to get involved in a pack trip and learn how the true experts do it! What I was hoping to find was the real deal; a real backcountry cowboy with a wealth of knowledge and the willingness to teach me the tricks of the trade. Frustratingly this proved harder to find than I had initially imagined, and a whole month with many potential meetings passed without me really finding exactly what I was looking for… I’m never one to give up though, and so didn’t lose sight of what I was hoping for and it finally paid off!

I spent some time researching outfitters in the area and emailed a business called Over The Hill Outfitters whose website caught my attention. I sent the email just a couple of days before the raft trip I wrote about in my previous post and so was eagerly hoping for a response by the time I returned from the rafting. This is where fate, or synchronicity, or whatever you want to call it happened to step in, as it turns out a lovely couple who were part of the raft trip happened to be close friends of the very people I had just sent my email to and they were able to put in a good word!

Fast forward a couple of days and I was out on the OTHO ranch getting to know the team. As I was beginning to get a bit disillusioned by some of my riding opportunities in the States thus far, I was trying not to get my hopes up and half expected things to stay rather tame. However, the second I stepped onto the OTHO ranch I knew I had found my kind of people. Within the first 5 minutes, Randy, the owner, said ‘Well, we just got these 5 new horses yesterday and have only tried one of them out. He acted like he’d never even been ridden before… How would you feel about trying the others out for us?’ …Jackpot! Every cell in my body came alive and I jumped at the chance. The horses were a little rusty but not dangerous, but that’s beside the point…the point is that I reckon I passed the test and Randy told me he had a pack trip leaving on the 25th and I’d be more than welcome to join plus spend as much time as I like on the ranch. I left feeling pretty buzzed and headed out for dinner with some friends.

From then on things just kept getting better! Upon returning from dinner I had an email in my inbox

“Lizzie, I’m doing some brainstorming…Could you go on a pack trip this Sunday thru Thursday? If you could, would you be willing to cook?”

This was Friday night, and so I almost wet myself at the chance to be able to join a pack trip in less than 2 days time. Obviously I agreed! I was still dreaming of one day being set loose in the mountains on my own, but was so chuffed to be given the chance to learn how the professionals do it with a team of guests.

Fast forward to departure day, and I arrived to be told that there’d been a change of plans. Randy had left the previous day to pack in a team of Ecologists (plus all their gear) from the US National Forest Service and had forgotten his horse-shoeing kit. One of his horses had lost a shoe and they were also in need of a cook – would I be willing to ride out and find them if they gave me a horse, a pack mule and a map? ‘Don’t worry if you don’t feel comfortable heading out there on your own, we would completely understand’

Did I feel comfortable? I felt like I had just won the dream lottery and had to try very hard to remain cool and collected and not explode into 500 tiny excited pieces right there on the spot. So off I headed, up Vallecito river trail with a beautiful grey horse named Smoke, my own pack mule named Floyd and a map of the area. It may have only been a 4 hour ride into the spot where they’d set up camp, but those 4 hours really did give me a taste of what I’d been hoping to be able to do since I was a young pup. Storm, Floyd and I had some proper rocky trails and cliff paths to negotiate, rickety looking bridges to cross (sound familier Miriam?) and rivers to ford. Some of the narrow paths on the side of the cliff could potentially be very dangerous indeed if your horse were to lose its footing…in situations like this it’s vital to keep your own heart-rate low and breathing regular to instil confidence in your horse as they can easily feed off your emotional state. Trust your horse! I still can’t believe the Outiffters trusted me to do this when they had only just met me, but they said they figured I was ‘pretty self-reliant’! 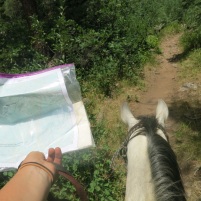 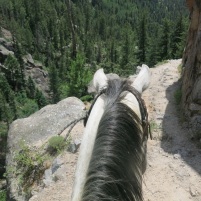 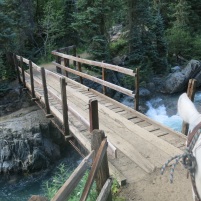 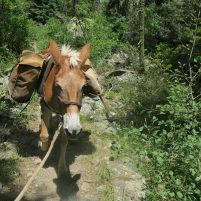 Once again I can only repeat how amazing it is to experience the land from the back of a horse rather than by vehicle or on foot. What a perspective you get! I treated myself to a healthy swig of Southern Comfort (alas, whisky is too pricey here) to congratulate myself on each of the three bridge crossings (they weren’t sure if that horse had ever crossed a bridge before) and soon made it to the camp without getting lost. 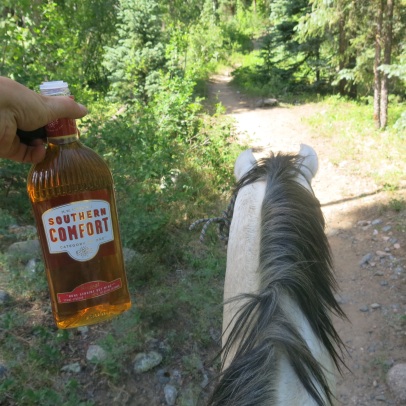 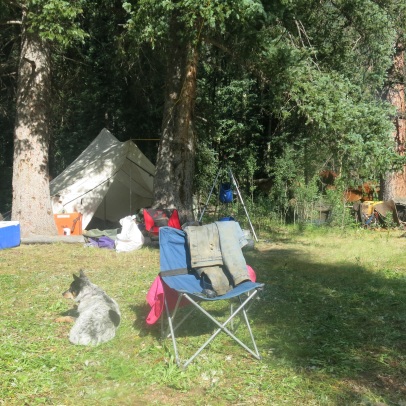 For the next 4 days it was myself, my new cowboy guru Randy, young cowboy Riley and 6 Forest Service Ecologists enjoying the simple life in the forest. The team were surveying the hydrology in the area and I especially loved all that chat about the wildflowers in the area which were amaaaaazing and incidentally many were very similar to that of the West of Scotland but just in greater abundance. I was in charge of meal preparation as well as helping and learning as much as possible about all the horse work and the logistics of the whole operation. I learned all sorts of knots and hobble techniques, and secretly really enjoyed spending one afternoon galloping around bareback tracking down some horses that had escaped and were loose in the wilderness. This particular area of wilderness was the Wimenuche Wilderness, the largest area of wilderness in Colorado. I think it looks like an exaggerated version of some of my favourite places in Scotland, and due to the altitude we were even gifted with some cold and wet weather too, so I felt right at home! 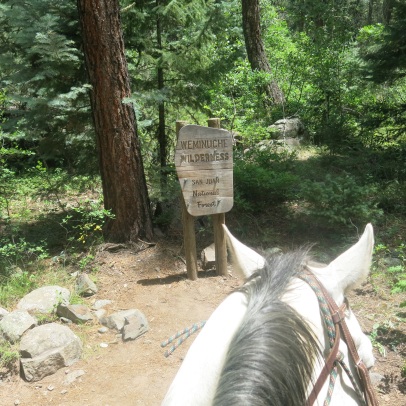 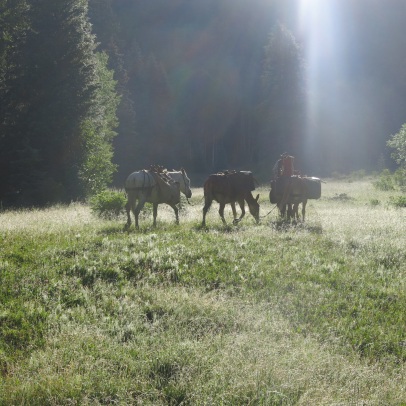 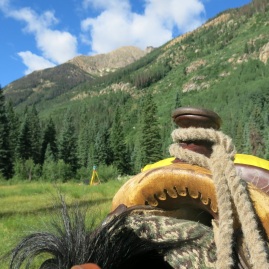 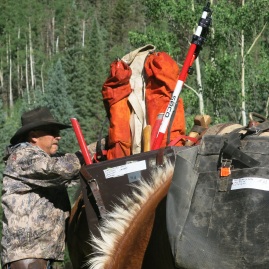 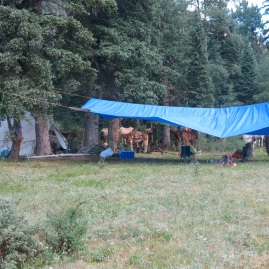 On the way back I was in charge of 6 pack mules as well as my own horse which too was a new experience and one which left me feeling very accomplished. It really is incredible watching these sure-footed creatures carry themselves plus us lazy humans and our gear over some very tricky terrain. I didn’t think it was possible for me to have any more gratitude for the equine species but it’s moved up to a whole new level. 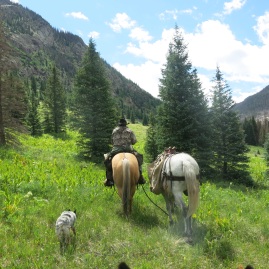 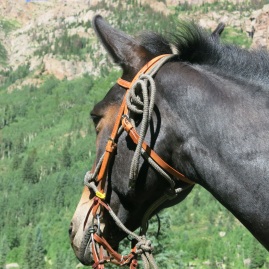 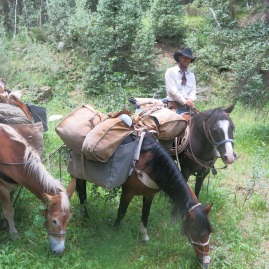 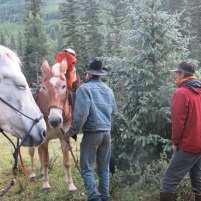 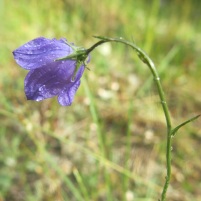 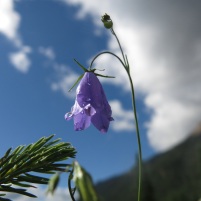 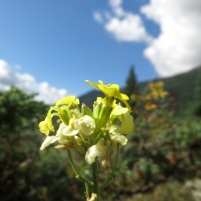 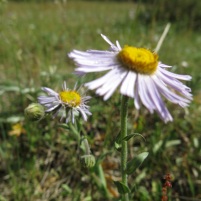 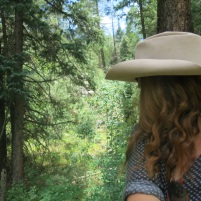 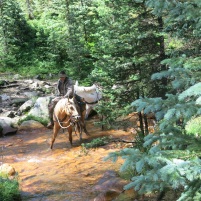 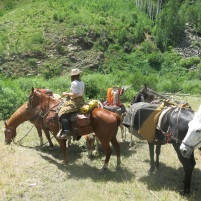 OTHO offers pack trips for fishing, hunting, photography and just general exploring as well as these specialised gear dropping trips. They have a really special thing going on.

So I’m back to reality now, and currently sitting in a lovely cafe on Durango main avenue. Although I am enjoying the iced mochas and my muscles are thanking me for treating them to a well-earned massage, I do feel a bit out of sorts being back in the hustle and bustle again. Till next time mountains, till next time. Xx 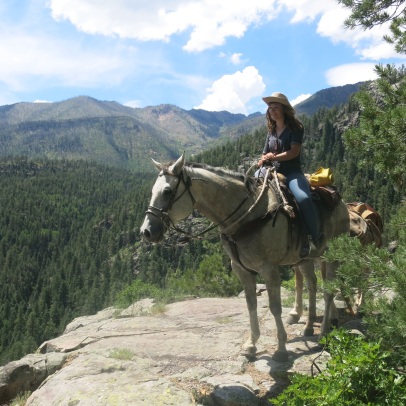 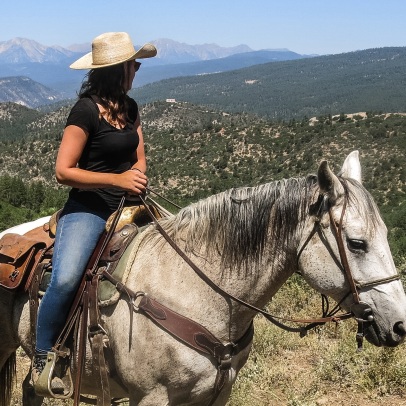